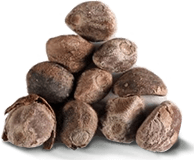 I'm so grateful to the guy who said that 3 was enough for a beginner... I took 3 seeds at 3 am coming back from a pub and god that was a nightmare. It began 2 hrs after i ate them. I was in my bed at this time. At first I was thinking a lot, mainly about girls I've been with. That was the ok part. I felt like I understoof life and i remember I was so happy saying to myself "oh my god I fucking understood the meaning of life". Then, I was under my blanket, warm and cosy, and I felt like a foetus and I thought I understood what it felt like. That was still not too scary. Then I felt my eyes where rolling back and my eyelids where closing and that was all black, but my mind was still active. I'm pretty sur I experienced a clinical death and not just imagined it.
As that scared the shit out of me, I tried to drink plenty of water and eat to reduce the effect. I ended up in my bathroom making me vomit to try to stop that shit. I panicked indeed. I was scared to end up in a psychiatric hospital, being that one guy who get stuck in his trip, and was about to call the emergencies. That made me realise I liked my life. I was very tired but I knew if I relaxed my eyes would roll back again and I don't wanted that to happen. So I just calmed down myself with deep breathing and reasonable thinking. That shit would stop in a few hours, I just had to stay awake till the effect was gone.
I survived, but I'll never try those seeds again.