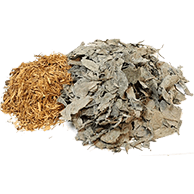 I took the second pack I bought (see earlier review).

Boiled one time for 12 hours as some ayahuasca shaman recipes on the internet suggest as alternative method to the one that goes in the package's instructions.

Acidified with vinegar and not lemon juice or Vitamine C. (also as suggested in the same alternative recipes.)

Whispered my intension to the brew, sat with icaros mp3's from Peruvian shamans, and waited. Nothing for one hour, but a slightly raised attention which I don't know if I should credit to my expectation. For 2 hours nothing happened, so because I read somewhere on the internet that if nothing is happening one should eat some fat rich foods I ate about 4 spoons of peanut butter to release some chemicals required to free the DMT which might be trapped (so the suggestions recommend).

Even after eating some food the effect didn't came. So ate some more and went to sleep.

At some point I woke up seeing absolutely real red stars flashing in the air below the room's ceiling a few meters away from the bed. I thought it finally came! Alas, it didn't. Perhaps the ayahuasca didn't want to show herself to me.

I read in some trip reports from people who went to Peru and had the real deal with actual shamans, that the brew doesn't have effect on some.

It might be up to the Ayahuasca spirit to decide how it will affect the individual's system. For me, thus far I had no visions, no pruging, no vomiting.

However, on the next day, I don't know if because of self-suggestion, a placebo effect or what, I was feeling very energized, full of self-confidence which was affirmed by people - strangers on the street - who would submissively nod to me while passing by.

I guess, I only guess, the product might have a subtile effect, not neccessarily expirienced through hard visuals. It is an ancient spiritual medicine after all and not a modern recreational drug (chemically produced for mass entertainment) and not a mushroom fun-high-five dance of mandallas.

I'm giving only three elephants however because I expected the description "enough for one powerful trip" to actually have more obvious results than what actually happened.

Not something I'd order again, but I might try the other types of Ayahuasca offered from this site to see if there is any difference.